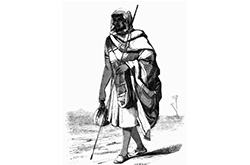 So he turned to my father and said: 'Is this your son?'

He (the old man) then rubbed my head and said: 'May Allah bless you, I bear witness that I heard the Messenger of Allah - صلى الله عليه وسلم - saying: "Feed them from what you eat and clothe them from what you clothe yourselves."
O nephew of mine, to lose the pleasures of this world is more beloved to me than to have the pleasures of the afterlife taken away from me.’

From this story we learn about some of the rights of a child over it's parents, that they are deserving to be fed and clothed by that which the parents feed and clothe themselves with.
Modern Non-Fiction Fiction Allah Patience Wealth Money Historical Classic Death Life Children Sin Repentance Regret Strength Debt Pain Niqab Hijab Grave Afterlife