The Boy and the King 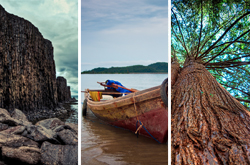 Ṣuhaib (May Allah be pleased with him) reported that the Messenger of Allah (may the peace and blessings of Allah be upon him) said: "There lived a king before you and he had a court magician. As he (the magician) grew old, he said to the king: "I have grown old, so send me a boy in order to teach him magic."

The king sent him a boy to serve the purpose. And on his way (to the magician) the boy met a monk to whom he listened and he liked [his speech].

It then became his habit that on his way to the magician, he would meet the monk and stay with him and when he arrives at the magician [late], the magician used to beat him because of this delay.

He complained about this to the monk who said to him: "When you feel afraid of the magician, say: Members of my family had delayed me. And when you fear your family, say: The magician delayed me."

It so happened that there came a huge beast and it blocked the way of the people, and the boy said: "I will know today whether the magician or the monk is better."

He picked up a stone and said: "O Allah, if the monk is dearer to You than the magician, bring about death to this beast so that the people be able to move about freely."

He threw that stone at it and killed it and the people began to move about freely. He then came to the monk and told him the story. The monk said: "Son, today you are superior to me. You have come to a stage where I feel that you would be soon put to a trial, and in case you are put to a trial, do not reveal anything about me."

The boy began to heal those born blind and the vitiligo stricken and he, in fact, began to cure people from all kinds of illnesses. When a courtier of the king who had gone blind heard about him, he came to him with numerous gifts and said: "If you cure me, all these things will be yours."

He [the boy] said: "I myself do not cure anyone. It is Allah, the Exalted, Alone Who cures; and if you affirm faith in Allah, I shall also supplicate to Allah to cure you."

This courtier affirmed his faith in Allah and Allah cured him. He came to the king and sat by his side as he used to sit before. The king said to him, "Who restored your eyesight?"

Thereupon he [the king] said: "Do you have another lord besides me?"

He [the boy] said:"My Lord and your Lord is Allah." So the king tortured him until he told him about the boy.

The boy was thus summoned and the king said to him: "O boy, it has been conveyed to me that you have become so much proficient in your magic that you cure the blind and the vitiligo stricken and you do such and such."

Thereupon he [the boy] said: "I do not cure anyone; it is Allah Alone Who cures," and the king took hold of him and began to torture him until he told him about the monk.

The king then handed him over to a group of his courtiers, and said to them: "Take him to such and such mountain; make him climb up that mountain and when you reach its peak ask him to renounce his Faith. If he refuses to do so, push him to his death."

So they took him and made him climb up the mountain and he [the boy] supplicated: "O Allah, save me from them in any way you like,
" and the mountain began to shake and they all fell down (dead) and that boy came walking to the king.

The king said to him: "What happened to your companions?"

He [the boy] said: "Allah has saved me from them."

So they took him and he [the boy] supplicated: "O Allah, save me from them." The boat turned upside down and they all drowned except the boy who came walking to the king.

The king said to him: "What happened to your companions?"

He [the boy] said: "Allah has saved me from them" and he said to the king: "You cannot kill me until you do what I command you to do."

The king asked: "What is that?"

He [the boy] said: "Gather all people in one place and tie me up to the trunk of a tree, then take an arrow from my quiver and say: In the Name of Allah, the Lord of the boy; then shoot me. If you do that you will be able to kill me."

The king called the people in an open field and tied the boy to the trunk of a tree. He took out an arrow from his quiver, fixed in the bow and said: "I the Name of Allah, the Lord of the boy,
" he then shot the arrow and it hit the boy's temple. The boy placed his hand upon the temple where the arrow had hit him and died.

The king was told: "Do you see what you were afraid of, by Allah it has taken place; all people have believed."

The king then commanded that trenches be dug and fire lit in them, and said: "He who would not turn back from his (the boy's) religion, throw him in the fire" or "he would be ordered to jump into it." They did so till a woman came with her child. She felt hesitant in jumping into the fire. The child said to her: "O mother! Endure (this ordeal) for you are on the Right Path."
Modern Non-Fiction Fiction Allah Patience Wealth Money Historical Classic Death Life Children Sin Repentance Regret Strength Debt Pain Niqab Hijab Grave Afterlife