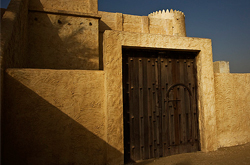 A burglar scaled the wall of Maalik ibn Deenaar's house one night and easily managed to get inside. Once inside the house, the thief was disappointed to see that there was nothing inside actually worth stealing. The owner of the home was inside at the time, he was busy performing prayer. Realizing that he was not alone, Maalik quickly ended his prayer and turned around to face the thief. Without showing any sign of being shocked or afraid, Maalik calmly extended greetings of peace and then said, "My brother, may Allah forgive you. You entered my home and found nothing that is worth taking, yet I do not want you to leave my home without taking away some benefit."

He stood up, went to another part of the room, and came back with a jug full of water. He looked into the eyes of the burglar and said,
"Make ablution and perform two units of prayer, for if you do so, you will leave my home with a greater treasure than you had initially sought when you entered it."

Much humbled by Maalik's manners and words, the thief said,
"Yes, that is a generous offer indeed."

After making ablution and performing two units of prayer, the burglar said, "O Maalik, would you mind if I stayed for a while, for I want to stay to perform two more units of prayer?"

Maalik said, "Stay for whatever amount of prayer Allah decrees for you to perform now."

The thief ended up spending the entire night at Maalik's house. He continued to pray until the morning. Then Maalik said, "Leave now and be good."

But instead of leaving, the thief said, "Would you mind if I stayed here with you today, for I have made an intention to fast the day?"

Maalik said, "Stay as long as you wish,".

The burglar ended up staying for a number of days, praying during the late hours of each night and fasting throughout the duration of each day. When he finally decided to leave, the burglar said, "O Maalik, I have made a firm resolve to repent for my sins and for my former way of life."

Maalik said, "Indeed, that is in the Hand of Allah."

The man did mend his ways and began to lead a life of righteousness and obedience to Allah. Later on, He came across another burglar he knew. [His friend] said to him, "Have you found your treasure yet?"

He said, "My brother, what I found is Maalik ibn Deenaar. I went to steal from him, but it was he who ended up stealing my heart. I have indeed repented to Allah, and I will remain at the door [of His Mercy and Forgiveness] until I achieve what his obedient, loving slaves have achieved."

This story gives us a glimpse of the simple lives the previous Imaams led, part of which was having a simple house and forsaking the worldly life and material possessions, so much so that if a thief entered he wouldn't find anything of value to steal. We also learn of the effect that being around righteous company has upon us, this is in accordance with the hadith of the Prophet (May the Peace and Blessings of Allah be upon him) in which he said: “A man is upon the religion of his best friend, so let one of you look at whom he befriends.” (Narrated by Abu Hurayrah in Abu Dawud 4833)
Modern Non-Fiction Fiction Allah Patience Wealth Money Historical Classic Death Life Children Sin Repentance Regret Strength Debt Pain Niqab Hijab Grave Afterlife