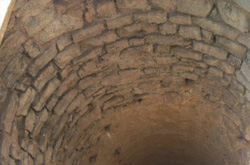 Allah said in Soorah al-Anbiya after the story of Ayyub (Job):
"And Ismateel, Idris, and Dhul Kifl, all of them were among the patient ones. And we admitted them to Our mercy, verily they were among the righteous." (Qur'an 21:85-86)
And in Soorah Sid after the story of Ayyub:
"And mention Our slaves Ibraheem, Ishag, and Ya'qoob, they all were owners of strength and of righteous understanding. Verily, We did choose them by granting them [a good thing], the remembrance of the home [in the Hereafter]. And they are with Us, verily of the chosen and the best. And remember Isma'eel, Alyasa, and Dhul Kifl, all are among the best."
The fact that he is praised in the verses mentioned above and that his name came alongside the names of other great Prophets shows that he too was a Prophet. May the blessings and peace of Allah be upon him. This is the popular opinion among the scholars.
Some others, however, claim that he was not a Prophet, he was rather only a pious, just and wise man. Ibn Jareer did not give his opinion on this issue. And Allah knows best.
Ibn Jareer and Abu Nujayh reported from Mujahid that he was not a Prophet, he was rather a pious man. He had volunteered to be the people's guide and judge between them with justice. This was the reason that he was called by the name Dhul Kifl.

Ibn Jareer and Ibn Abi Hatim reported from Mujahid that: successor. Iblees thereafter ordered his fellow devils saying, 'Go after that man.' However, the devils were unable to mislead him. So Iblees then said to them, 'Leave him to me.' He then came to him in the guise of a poor old man at the time of siesta. He used not to sleep in the day or at night except that particular occasion. So Iblees knocked at his door and the man asked, 'Who is at the door?' (Iblees replied, 'An oppressed old man.' So he got up and when he opened the door, Iblees started telling him a story, saying, 'There is a problem between me and my people, for verily they have wronged me and did with me what they did.' He intentionally prolonged his story so much that the time for siesta passed and afternoon approached. The man said, 'When I do, I will take your rights.' Then he went to his work-place and searched for that old man but could not find him. On the next day, when he was judging between people in their matters, he waited for him but he again could not see him. Then again when it was time for siesta, he went home and just when he was about to sleep, the same man turned up and knocked the door. He asked, 'Who is at the door?' The man replied, 'The oppressed old man.' He opened the door and said, 'Did I not tell you that when I go to my court to judge that you should come to me?' The old man said, 'My people are the worst. When they came to know that you are sitting in the court to judge between us, they said to me, 'We will give your rights. But then when you left, they again started refusing to give me my rights." He said, 'Go now and when I am in my court, come to me.'
So he was again unable to have his siesta. He then went to his court and waited for the old man but he did not turn up again. He felt very drowsy and so said to one of his household, 'Do not let anyone come to this door so I can get some sleep because I am feeling very sleepy.' Then when that time of the day came, the old man came. The watchman at the door said to him, 'Go back, go back.' The old man said, 'I came to him yesterday and informed him of my story.' The man at the door replied, 'By Allah we have been ordered not to let anyone come close.' Then when he felt that he could not get past the watchman, he looked up and found that there was an opening from which he could get inside the house. Thus he did that and then knocked the door from inside, waking the man up. He said to the watchman, 'Did I not tell you not to let anyone in?' The watchman replied, 'He did not enter the house from where I was watching, so ask him where he got in.' He then recognised the old man, who was inside by that time. He asked him, 'Are you an enemy of Allah?' He replied, 'Yes and you outwitted me in everything, so I did this to make you angry.' Thus Allah named him Dhul Kifl because he took responsibility of something and then fulfilled it."
Ibn Abi Hatim reported that Abu Moosa al-Ash'ari said while standing on the minbar. "Dhul Kifl was not a Prophet. Rather he was a pious man who prayed one hundred prayers every day. After that he took it up as his duty to pray one hundred prayers daily and thus he was named Dhul Kifl."

This story shows us the importance of justice and fulfilling responsibilities in Islam, even when it comes to dealing with an evil person which in this case was the most evil individual in existence, Iblees (The Devil).
Modern Non-Fiction Fiction Allah Patience Wealth Money Historical Classic Death Life Children Sin Repentance Regret Strength Debt Pain Niqab Hijab Grave Afterlife