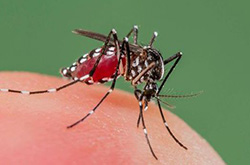 Zaid ibn Aslam related that Namrud had with him great supplies of food, and people would go to him to seek provision from him.
Prophet Ibrahim (may the Peace and Blessings of Allah be upon him) was one of those who went to him, and between him and Numrud there took place the famous debate that Allah (The Exalted) related in the Qur'an: "Have you not looked at the one who argued with Abraham about his Lord (Allah), because Allah had given him a kingdom? When Abraham said (to him), "My Lord is the one who gives life and causes death." He said, "I give life and cause death." Abraham said, "Indeed, Allah causes the sun to rise from the east; so cause it to rise from the west." So the disbeliever was utterly defeated. And Allah does not guide the wrongdoing people." (Qur'an 2:258)

Namrud didn't give Ibrahim (may the Peace and Blessings of Allah be upon him) any food, and when he returned to his family, he went to a sand-hill and filled two sacks with dirt, with the intention of preoccupying his family when he returned to them. When he returned home, he put down his possessions, and then leaned on something and fell asleep. His wife, Sarah, went to the two sacks and found them to the filled with good food. With that food, she began to cook. When Ibrahim woke up, he was surprised to find the food that she had prepared. He said, "Where did you get this from?" She said, "From the food that you brought with you." Ibrahim (may the Peace and Blessings of Allah be upon him) knew that it was Allah Who provided that provision for them. Then Allah (the Exalted) sent an angel to the aforesaid Tyrant king (Namrud), ordering him to believe in Allah, but he refused. The angel called him to believe a second time, and he refused again; then a third time, and still he refused.

The angel said, "Gather your armies and I will gather mine." Namrud gathered his army together at the time of sunrise, and Allah sent to him mosquitoes, so many in number, that the people of the army could not even see the sun. Then Allah gave power to the mosquitoes over them: they ate their flesh and blood, leaving them as decomposed bones. One of those mosquitoes entered into the nostrils of the king (namrud). Allah punished him by it, and he was in so much pain that he would continually hit his head against objects (hoping to make the mosquito exit or simply because of sheer madness that resulted from the pain) until he finally died.

This story reminds us of the narration of the Prophet Muhammad (May the Peace and Blessings of Allah be upon him) in which he said: “If you rely on Allah with due reliance, Allah will provide for you as He does for the birds; they leave with empty stomachs in the morning and return full at dusk.” In this story is a sign of Allah's power in which He removed the tyrant Namrud by one of the weakest creatures, the mosquito. There is also another benefit in that Namrud didn't believe even when an angel called him to believe, this is an important point to reflect upon as many non-Muslims ask why doesn't an angel appear before me if your religion is true?. We say that even if an angel appeared before you, if your heart is sealed like Namruds then you still won't believe.
Modern Non-Fiction Fiction Allah Patience Wealth Money Historical Classic Death Life Children Sin Repentance Regret Strength Debt Pain Niqab Hijab Grave Afterlife