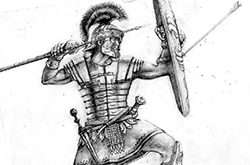 "I was with ibn al-Mubarak and Mu'tamir ibn Sulayman (may Allah have mercy on them) in Tarasus, and suddenly people were called to arms (for war). When the two armies (the Muslims and the Romans) took their positions, a Roman fighter came forward and asked for a one-to-one fight. A Muslim fighter went forward to fight the Roman, however, he was killed. Another person volunteered but was also killed. The Roman fighter managed to kill six Muslim fighters and was walking between the lines arrogantly asking for a fight, but no one dared to approach him.

Then ibn al-Mubarak looked at me and said, 'If I am killed, do so and so.' He then approached the Roman fighter with his horse and killed him after hours of skirmishing. He asked the other Romans to come forward for a fight. He managed to kill six Roman fighters; and when he later asked for a fight, but no one dared to come forward, they were all afraid. Ibn al-Mubarak disappeared for a while in the rows and then came to his position near me and said, 'O Abdullah, do not mention what you have just seen to anyone as long as I am alive.'"

From this story we learn more about the character of Abdullah ibn al-Mubaarak, not only was he a scholar but also a brave warrior, which is a combination you find often in history.
Modern Non-Fiction Fiction Allah Patience Wealth Money Historical Classic Death Life Children Sin Repentance Regret Strength Debt Pain Niqab Hijab Grave Afterlife