The Grave Of A Righteous Man 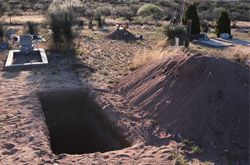 Ibraaheem ibn Bashaar narrated this story: "While I was walking towards Kufah with Ibraaheem ibn Adham, he stopped beside a grave and invoked Allah to have mercy on its dweller.
"Whose grave is this?' I asked.

'It is the grave of Ḥumaid ibn Jaabir,' said Ibraaheem. 'He was once the leader of all the townships that are in this area.'

'What was so special about him?' I asked. Ibraaheem told me that he was a very rich leader who would spend his nights enjoying unworthy games and entertainment.

Ibraaheem said, 'One night he fell asleep and saw a dream in which a man was standing over his head,'. 'The man had a book in his hand, which Ḥumaid grabbed and tore open. The words inside were written with gold [ink]. They ran as follows: Do not prefer my Fire over my Light, and do not be deceived by what you own in this world, for what you own is preventing you from getting what is saved for you in the afterlife. True, what you have might have been called a kingdom, had it not been for the fact that it will all soon perish. And your life might have been called a life of happiness and joy, had it not been for the fact that it will be followed by anxiety and misery. So beware of falling under the spell of these worldly ornaments, or you will join the ranks of the destroyed ones

"And hasten to forgiveness from your Lord and a garden as wide as the heavens and the earth, prepared for the righteous"
[Surah Aal-‘Imraan 3:133]

Ḥumaid then woke up in a terrified state.

'Resigning from his post as leader, Ḥumaid betook himself to this mountain, where he led a simple life, doing menial work to maintain his physical upkeep, but dedicating most of his time to the worship of Allah. I came here once and met him, by keeping company with him, I found him to be a noble man. I would thereafter continue to visit him until he died.'

From this story we learn that people, no matter what status they are, can always change and come closer to Allah, just like how the ruler Humaid did. We are also reminded to ask Allah to have mercy upon the people who have passed away, like Ibraheem did for Humaid.
Modern Non-Fiction Fiction Allah Patience Wealth Money Historical Classic Death Life Children Sin Repentance Regret Strength Debt Pain Niqab Hijab Grave Afterlife