Woe Onto You, O Deenaar 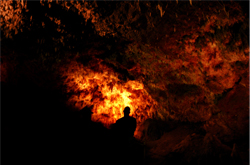 There is an interesting story related about Deenaar Al-‘Ayaar.
Deenaar had a righteous mother who would constantly advise him to repent for his wayward, sinful existence, but as much as she tried, her words had no positive effect on him whatsoever. Then, one day, as he was walking by a graveyard, he stopped to pick up a bone. He was shocked to see how it crumbled and turned to dust in his hand. The sight of that bone had a profound effect on Deenaar. He began to think about his life and his past sins, and he then exclaimed, "Woe unto you, O Deenaar, you are going to end up like this crushed bone, and your body will turn into dust."
All of his past sins then flashed before his eyes, and he made a firm resolve to repent. Turning his gaze towards the sky, he said,
"My Lord, I now turn to you in complete submission, so accept me and have Mercy on me."

With a completely changed heart and state of mind, Deenaar went to his mother and said, "Mother, what does a master do when he captures his slave who had run away from him?"
She said, "[To punish him] the master provides him with coarse clothing and low-quality food; and he ties his hands and feet so that he does not make another attempt to escape."
Deenaar said, "Then I want a garment made of coarse wool, low-quality barley, and two chains. Mother, do with me that which is done with a runaway slave. Perhaps my Lord will, upon seeing my humiliation and humility, have mercy on me."
Seeing that her son was adamant and resolute in his request, she complied.

At the beginning of every ensuing night, Deenaar would begin to cry and wail uncontrollably. And he would continue to repeat to himself the words, "Woe unto you, O Deenaar, do you have the power to withstand the Hell fire? How brazen you have been to have led a life that has made you deserving of the anger of the All-Mighty!"
He would continue upon that state until the morning.

Turning wan and pale, Deenaar's body slowly wasted away. Not being able to bear seeing him in that pitiable state, his mother said,
"My son, be easy on yourself." He answered, "My mother, let me remain tied for a short while, so that perhaps I can achieve long-term comfort later on. For tomorrow, I will be waiting a long time before my Majestic Lord, and I do not know whether He will order me to go to places of beautiful shade or to places of unspeakable horror." She said, "My son, at least rest for a while." He replied, "It is not present rest or comfort that I am seeking out. Mother, it is as if I see you and other people being led tomorrow towards Paradise, while I am being led towards the Hell-fire along with his inhabitants." She left him then, and he returned to crying, worshipping, and reciting the Qur'an. One night, as he was reciting the Qur'an, he came across these verses: "So, by your Lord, We shall certainly call all of them to account, for all that they used to do." [Surah Al-Ḥijr 15:92-93].

As he contemplated the meanings and implications of these verses, he cried with such intensity that he fainted. His mother rushed to him and tried very hard to revive him, but he wouldn't respond. She thought he had died. Looking into the face of her son, she said,
"O my beloved one, O the joy of my heart, where shall we meet again?" In fact, Deenaar still had some life left in him, and hearing his mother's words, he answered with a faint voice,
"My mother, if you do not find me on the wide plains of the Day of Resurrection, then ask Maalik, the Custodian of Hell-fire about me."
He then made a croaking sound and died. After she finished washing his body, Deenaar's mother prepared him for his funeral. She then went out and made the announcement, "O people, come to the funeral prayer of one who has been killed by [fear of] the Hell-fire." People began to come from all directions. It is said that during that era, no greater gathering came together and no amount of tears were shed as much as on that day.

On the same night that his funeral was held, one of Deenaar's friends saw him in a dream, attired in a green robe. Deenaar was prancing around in Paradise, all the while reciting the verse:
"So, by your Lord, We shall certainly call all of them to account, for all that they used to do." [Surah Al-Ḥijr 15:92-93]

During the dream, his friend heard him say, "By His Might and Majesty, He asked me [about my deeds]. Having mercy on me, He forgave me and pardoned me [my sins.] Lo! Convey news of this to my mother."
Modern Non-Fiction Fiction Allah Patience Wealth Money Historical Classic Death Life Children Sin Repentance Regret Strength Debt Pain Niqab Hijab Grave Afterlife