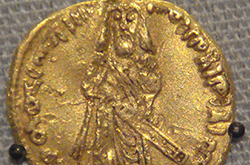 Asma’i relates from his father that a prisoner was brought before ‛Abdul-Malik and was accused of having rebelled against the ruler.