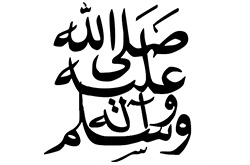 In the year 1258 (675 A.H.), there lived a tyrant Mongolian leader by the name of Haloko who invaded Baghdad and killed thousands of Islamic scholars. This paved the way for Christian missionaries to preach Christianity and convert Muslims openly. Haloko himself was married to a Christian woman. One day, a delegation of the most notable Christians headed for Baghdad to attend a grand party to celebrate the conversion of a key Mongolian leader to Christianity. The Mongolian leader had his favourite hunting dog on a leash nearby.

One of the Christians then began congratulating the Mongolian leader on his wise decision and then proceeded to revile the blessed character of the Prophet (may the peace and blessings of Allah be upon him).

The dog started acting violently and jumped on the Christian, scratching him
badly. It took several men to make the dog let go of the Christian. One of the attendees turned to the Christian and said, "The dog did this because of what you said about Muhammad (may the peace and blessings of Allah be upon him)." The Christian brushed aside the man’s comment and arrogantly said, "No, that was not the reason for the dog's reaction. When I was speaking, I pointed with my hand and the dog thought that I was going to hit him." The Christian appeared unmoved by the incident and continued to insult the Prophet (may the peace and blessings of Allah be upon him). At that time the dog, in such a rage, cut itself loose, jumped on the Christian and sank its molars in the man’s neck. It snatched his throat out and the man died immediately. This incident caused a lot Mongolians to embrace Islam.

This story mentions what happened to a person who insulted the Prophet (May the Peace and Blessings of Allah be upon him). Incidents like this have taken place throughout history, where a person has insulted the Prophet and then has been met with a degrading end.
Modern Non-Fiction Fiction Allah Patience Wealth Money Historical Classic Death Life Children Sin Repentance Regret Strength Debt Pain Niqab Hijab Grave Afterlife