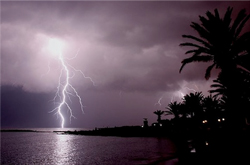 This is the story concerning an-Najjaashee's refusal to surrender the Muslims in his land to the disbelievers from Quraish, and his refusal to accept gifts to bribe him to do that:

Az-Zuhree may (Allah have mercy on him) said: "I had this hadeeth narrated by ‛Urwah ibn az-Zubayr (may Allah have mercy on him): from Umm Salamah (may Allah be pleased with her). So ‛Urwah said: "Do you know what he (i.e. an-Najjaashee) meant by his saying: "Allah did not take any bribe from me, when He restored my kingdom to me, such that I should accept any bribe to keep my kingdom; And Allah did not do what the people wanted with regard to me, such that I should obey the people against Him?"

So I said; "No" So then ‛Urwah explained it, saying: "‛Aa'isha (may Allah be pleased with her) narrated to me that:

An-Najjaashee's father was previously king of his people, and he had a brother, and his brother had twelve sons. But the father of an-Najjaashee had no child besides an-Najjaashee.

So the people of Abyssinia started plotting together and they said: We ought to kill the father of an-Najjaashee, and give the kingship to his brother, then his brother has twelve sons. So then later they can inherit the kingship and the Abyssinian people will remain for a long time without any infighting between them. So they attacked (the king) and killed him, and they made his brother king.

So then an-Najjaashee entered upon his uncle, and he impressed him so much that he consulted nobody else besides him, and he was found to be a person of intellect and firm resolve.

So when the rest of the Abyssinians saw the status which he now had with his uncle they said: This boy has got the better of his uncle now, so we do not feel safe that he will not make him king over us (after himself), and he knows that we have killed his father. So if that happens, he will not leave a single noble amongst us except he will kill him.

So they went to his uncle and said: You know that we killed his father, and put you in his place; and we do not feel safe that he will not become king over us (after you). So either you kill him, or you banish him from our land.

He said, "Woe to you, you killed his father yesterday, and now I have to kill him today! Rather I will send him away from your land."

So they took him away, and put him in the market place; and they sold him as a slave to a trader from the traders who threw him into a ship, having bought him for 600 or 700 dirhams.

Then he departed with him.

Then when it was the evening of that same day some clouds from the autumn clouds appeared. So his uncle went out to enjoy the rain, but he was struck by a lightening bolt which killed him.

So the people quickly went to his children, but they found that they were stupid people. There was not a single one that had any good in him. So the affair of the Abyssinian's was thrown into confusion.

So some of them said to others: "You know, by Allah, that the only one who is suitable to be king over you is the one who you sold this morning. So if you have any concern for the affair of the Abyssinian's, then go and get him before he leaves."

So they went searching for him. So they found him and they brought him back; and they placed the crown upon his head, and they sat him upon his throne, and they made him the king.

But the trader (came and) said: "Give me back my money, for you have taken my slave!"

They said: "We will not give you anything."
So the trader said, "Then by Allah, I will go and speak to him."

So he went to him and spoke to him, and said: "O king! I bought a slave and the people who sold him to me took the price, but then they seized the slave and took him away from me, and they won't give me my money back." So this was the first case that was seen from the firmness, wisdom, and justice of an- Najjaashee that he said: "You must either give him his money back; or hand over his slave to him so that he may take him wherever he wants."
So the people said: "Rather we will give him his money." So they gave it to him.

So this is why (when the Najjaashee did not surrender the Muslims, and did not accept the bribe from the disbelieving Quraish to hand over the Muslims), he said: "Allah did not take any bribe from me, when He restored my kingdom to me, such that I should take any bribe to keep my kingdom; And Allah did not do what the people wanted with regard to me, such that I should obey the people against Him."