The Story of Prophet Ayyub 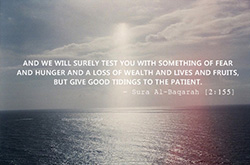 Ibn Ishâq said that the Prophet Ayyub (Job) was Roman. His lineage was Ayyub Ibn Moos Ibn Razih Ibn ‛Ees ibn Ishaq Ibn Ibraheem (may the Peace and Blessings of Allah be upon them all).

However, others said that his lineage was Ayyub ibn Moos ibn Ra‛ooeel ibn ‛Ees ibn Ishâq ibn Ya’qoob (may the Peace and Blessings of Allah be upon them all).

“… and from his offspring Dawood, Sulaymân, Ayyub, Yusuf, Moosa and Hâroon…” (Qur’an 6:84)
In this verse, the pronoun ‘his’ is referring to Ibraheem and not Nooh (peace be upon them all).
He is one of those Prophets who are mentioned specially that they received revelations. This is seen in Soorah an-Nisâ :
“Indeed We have revealed to you as We revealed to Nooh and the Prophets after him. And We revealed to Ibraheem, Isma’eel, Ishâq, Ya’qoob, the tribes, ‘Eesa and Ayyub…” (Qur’an 4:163)

Ibn Abi Hâtim reported on the authority of ‘Abdullah ibn ‘Abbâs who said: “ Allah dressed Ayyub (peace be upon him) with a dress from Paradise, then he went aside and sat in a corner. His wife came and did not recognise him. So she asked, ‘O’ slave of Allah, where did the afflicted person go who was here? I am afraid that dogs or wolves have eaten him.’ She kept speaking to him for some time and then he finally said to her, ‘What is wrong with you, I am Ayyub, Allah has indeed returned to me my body.’”
Ibn Abbâs said: “Allah returned to him his wealth and children and others twice as many as them.”
Ibn Abi Hâtim reported that Wahb ibn Munabbih said: “Allah revealed to him, ‘I returned to you your family and your wealth, and the like of them along with them. So take a bath from this water, for there is a cure for you in it and offer sacrifice on behalf of your companions and seek forgiveness for them for verily they disobeyed Me concerning you.’”
It is narrated on the authority of Abu Hurayrah that the Prophet peace and blessings be upon him said:
“When Allah cured Ayyub He rained on him golden locusts. Ayyub began collecting them with his hands and putting them in his clothes. It was said to him, ‘O’ Ayyub, are you not satisfied and full?’ He said, ‘O’ Lord, who will feel full from Your Mercy?’”
In another narration on the authority of Abu Hurayrah that the Prophet peace and blessings be upon him said:
“While Ayyub was bathing naked, golden locusts dropped on him, so he began collecting them in his clothes. So his Lord called him, ‘O’ Ayyub, did I not give you enough, so what do you do?’ Ayyub said, ‘Yes my Lord but there is no sparing from Your blessings for me.’”
“Strike with your foot” was the divine order. So Ayyub (peace be upon him) did as ordained and struck the earth with his leg. Allah then caused a cold spring of water to gush forth and ordered him to take bath and drink from it. Allah then removed his suffering and pain, his illnesses and diseases that were both visible and hidden on his body and replaced all that with a healthy body, both visible and hidden. Allah also made him handsome and gave him abundant wealth, to the extent that golden locusts rained on him.
Allah also returned his family as He said, “We gave to him his family, and the like of them with them.” (Qur’an 21:84) It is said that Allah brought his children back to life. Some others said that Allah gave him other people in place of those who had died, wherein in the Hereafter, Allah will gather them all together. As regards the part of the verse, “A mercy from Us,” (Qur’an 21:83-84) it means that We removed his hardships and cured him from whatever he had as a mercy and grace from Us. The end of the verse, “And a reminder to worshippers” means that what happened to Ayyub (peace be upon him) is a reminder and a lesson for all those who are put to trial concerning their bodies, wealth, and family. All such people should take the example of Prophet of Allah, Ayyub, who was tried by Allah with something that was greater than what others would be inflicted with and despite that, he was patient and had hope that Allah would cure him from that.

Ayyub (peace be upon him) lived in the Roman land for a further seventy years after his affliction. He preached to them the religion of Monotheism, One God. However, they later changed the religion of Ibraheem (peace be upon him) after his death.
Allah said:
“And take in your hand a bundle of reeds and strike with it, and do not break your oath. And We found him patient, a good slave, verily he was patient. (Qur’an 38:44)
This speaks about His mercy upon Ayyub (peace be upon him) when Ayyub had sworn that he would whip his wife one hundred lashes. It is said that he made the oath because she sold her plaits. It is also said that Shaytân came to her disguised as a doctor (physician) and described to her some medicines for Ayyub. When she came and informed Ayyub, he knew it was Shaytân and subsequently swore that he would whip her one hundred lashes. When Allah cured him, He told him to take a bundle of reeds, bunch them together as one and then to hit her only once. This one hit was considered one hundred, thus he could fulfill his oath this way.
This was a way out and relief for the one who feared Allah and obeyed Him, especially with respect to his wife who bore his illness patiently and had hope. She was a pious, righteous ans rightly guided woman. May Allah be pleased with her.
Ibn Jareer and others mentioned that when Ayyub (peace be upon him) died, he was ninety-three years old. Some others said that he lived longer than that.
Before he passed away, he entrusted his mission to his son Hawmal and after him to his other son Bishr. Many people claim that he was Dhul Kifl. And Allah knows best. These same people also claim that he was Prophet, who died at the age of ninety-five.

The story of Prophet Ayyub (may the Peace and Blessings of Allah be upon him) is one which is filled with lessons for us to ponder over. The virtue of patience is shown to us in the Prophet Ayyub through some of the most dire situations that one can come across in life.
Modern Non-Fiction Fiction Allah Patience Wealth Money Historical Classic Death Life Children Sin Repentance Regret Strength Debt Pain Niqab Hijab Grave Afterlife